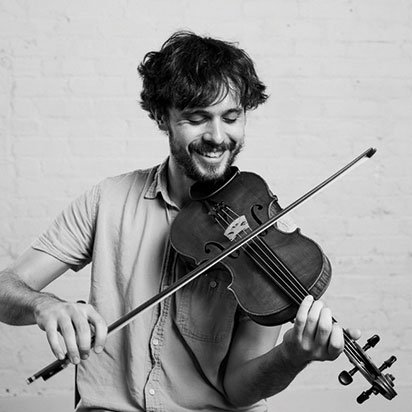 John Mailander is an acclaimed multi-instrumentalist who moves listeners in concert halls, festivals, and music camps at home and abroad. A sought-after performer, producer, educator, and recording artist, John is known for his deeply rooted voice on the fiddle, mandolin, and other stringed instruments.

A San Diego native, now based in Nashville, TN, John is an in-demand session musician. His debut solo album, Walking Distance, featuring an all-star cast of musicians from the New England acoustic music scene, was released in 2014 to critical acclaim. The process of recording his following album, 2019’s Forecast, led John to found a group of his own under the same name. John Mailander’s Forecast is now a continually evolving collective of improvisational musicians from the Nashville music community. Their newest album, Look Closer, was released in May 2021.

As an educator, John has been on staff at some of the most prestigious music camps in the Americas, including the Augusta Heritage Center Bluegrass Week, Swannannoa Gathering, Puget Sound Guitar Workshop, California Bluegrass Association Music Camp, and Nimblefingers Old Time & Bluegrass Music Workshop. He also keeps a busy private instruction schedule, teaching students all over the country in person and online. His first instructional book, A Fiddler’s Guide to Moveable Shapes, was published in Fall 2017. He is a graduate of the Berklee College of Music in Boston, MA.

“All of John’s qualities – kindness, intelligence, humor, curiosity, integrity and love of beauty – show up every minute in his musicianship.”